The activities of the original operators of the Eternity ransomware group can be traced back to a couple of years when they were actively operating under different names(Vulturi Stealer, Jester Malware, etc) on multiple forums. However the original threat actor operates on GitHub under the name of ‘L1ghtM4n’, which can be interpreted as ‘LightMan’. The Github repository maintained by this actor, features various projects. Based on the activity of L1ghtM4n, CloudSEK researchers have mapped out the activities leading to the development of the Eternity Malware.

The ransomware group Eternity is active on multiple channels and has been providing various updates on all of them, which indicates that the group could be operating as a group. The ransomware builder that the group sold recently, is gaining traction across threat actors. CloudSEK researchers identified a GitHub repository by L1ghtM4n, who is suspected to be one of the operators of Eternity.

This function, as the name suggests, destroys the backup copy of the data via WMI. As shown in the following image, the malware accesses WMI “Win32_ShadowCopy” class, and executes the method Delete(). Upon the execution of “Delete,” the backup data is deleted, and the user is prevented from performing a data backup to restore the locked files.

This function writes “Eternity” as a new value in “HKEY_CURRENT_USER\Software\Microsoft\Windows\CurrentVersion\Run,” which points to the ransomware binary as shown in the image below. This will execute the ransomware each time the user logs into the system.

The image below is the registry snapshot of the Run Key after the execution of the malware sample “sam.exe.”

This function plays a crucial role in the ransomware operation. It initiates and launches a Windows Form as shown in the image below. A Windows Form is the UI element of desktop applications. The malware has a class named PayM3, which represents the Form. The CreateUI function instantiates the required data and executes the Form.

Once the Form is executed, a pop-up is generated as shown in the image below. The decryption logic is linked to this Form. The Form will start the decryption routine when the user submits the right password generated by the ransomware, as mentioned earlier. Since this Form is critical to the decryption of the data, the much sophisticated ransomware hooks the keyboard so that the user doesn’t close the windows, even by accident.

The aforementioned Form implants a keyboard hook to intercept events on the user’s keyboard in the function PayM3_Load, as shown in the image below. The callback functions “LowLevelKeyboardProc” and “SetWindowsHookEx” are used to hook the user keyboard. And whenever the user presses a key, the system executes the function “captureKey” provided by the malware. Although a keyboard hook is a trivial mechanism in spyware and bots, in this instance, such hooks are used to achieve a different result.

The hook shown in the following image makes certain that the user does not terminate the Form is not explicitly or accidently. The hook is only interested in intercepting Modifier keys such as Shift/ Alt/ CTRL/ Windows keys. Usually, users leverage it to forcefully terminate a program or carry out other tasks like opening the Task Manager on Windows.

The operators of Eternity ransomware use this as a fail-safe feature for the malware by the adversary. The hook simply checks whether the pressed keys are modifier keys. If they are, then it simply executes a return, ensuring that the pressed keys are not registered by the system.

Upon submission of a valid password to the Form, it executes a function called “UndoAttack” that decrypts the locked data.

Links Between L1ghtM4n, Jester, and Eternity

Anandeshwar Unnikrishnan
Threat Intelligence Researcher, CloudSEK
Total Posts: 14
Anandeshwar is a Threat Intelligence Researcher at CloudSEK. He is a strong advocate of offensive cybersecurity. He is fuelled by his passion for cyber threats in a global context. He dedicates much of his time on Try Hack Me/ Hack The Box/ Offensive Security Playground. He believes that “a strong mind starts with a strong body.” When he is not gymming, he finds time to nurture his passion for teaching. He also likes to travel and experience new cultures.

Hansika Saxena
Total Posts: 2
Hansika joined CloudSEK’s Editorial team as a Technical Writer and is a B.Sc (Hons) student at the University of Delhi. She was previously associated with Youth India Foundation for a year. 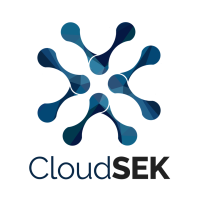 Rishika Desai
Total Posts: 0
Sorry! The Author has not filled his profile.

Suchita Satyaprem Katira
Total Posts: 0
Sorry! The Author has not filled his profile.
×